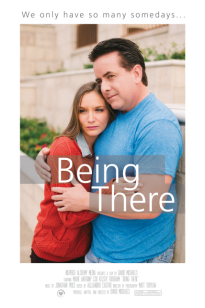 Synopsis: Kevin’s an aspiring screenwriter who’s about to give up hope of ever making it. But when his best friend Samantha suddenly loses her father to a car crash, they both find strength, hope, and encouragement in each other.

Behind-the-Scenes: In this film, Kevin’s struggling with writer’s block. There’s a reason for that.

At the time, I’d been earning my living as a writer, and I was stuck. I was blocked. One morning, I sat in front of my computer, tried typing, and just nothing was coming out or working. Garbage. Useless. Crap. So I decided to take a break. I did my laundry. And as I was doing that, I felt my frustration about my writer’s block. And then a scene came to mind. I pictured someone (Kevin) sitting in front of his computer, like me, feeling frustrated and hopeless about his own writer’s block.

So I returned to my computer and wrote about that.

I just wanted to write something. Anything. Even if it was a stupid scene about someone not being able to write. But once I started writing that scene, suddenly the “Samantha” character appeared, and her own story began to emerge. I kept writing. Kevin and Samantha started talking to each other. Helping each other. Really, I was just talking to myself, through them. Expressing my feelings of frustration, disappointment, loss, and hopelessness. But through them, through the story, I also tried to inspire and encourage myself too. Tell myself what I needed to hear, what I needed to remember.

About ten pages later, I reached “The End” — and I was happy. I wrote something. I finished something. I broke through my writer’s block.

I didn’t think anything would come of the script. I wasn’t planning to use it for anything. I just saved it on my computer and forgot about it.

Several days later, I posted on Facebook that I felt like directing another short film, and wondered if maybe some of my friends had a house or office space or something they wouldn’t mind letting me film at. One person who responded was Mark Anthony Cox, an actor I’d met at a meet-and-greet for a San Diego 48 Hour Film Project gathering. He offered his place as a potential filming location, but asked about the script.

I didn’t have a script yet. I wanted to know what locations I could work with first, and write a script around that. But I had just finished this other little script about a struggling screenwriter… I mentioned it. He thought it sounded interesting and wanted to read it. I gave it a quick re-write/polish and emailed it to him. He loved it and asked if he could play Kevin. I knew he was an experienced and talented actor. I’d seen his demo reel and thought he’d be great for the part.

I needed to hold auditions to find Samantha though. Several women did amazing. One stood out above the rest. Kelsey Fordham. And she wasn’t even in the country at the time. She was traveling, but after reading the script, was also very interested in the role, and asked if she could send me a video audition instead. And the rest is history.

I was lucky enough to assemble an incredibly talented team — through referrals and previous work relationships — who all graciously and joyfully contributed their time, talent, expertise, and production equipment to make this film possible. Everyone on this project (literally, everyone, even the production assistants) did amazing work and were a gift and pleasure to work with. I can’t praise these people highly enough. They’re easily some of the best filmmakers in San Diego County (where I was living at the time).

And before long, “Being There” — a throw-away script that was just me trying to break through my own writer’s block — turned into this beautiful, emotionally-moving, high quality film with an inspirational message. And once it was done, I had just enough money to submit it to a few film festivals.

It won “Best Dramatic Film” at the California Film Awards.

The Message of “Being There” – Writer-Director David R. Michaels