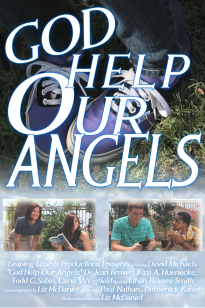 Synopsis: Two young soulmates are destined to meet today — except they’re both a little too shy to say hello. It’s up to their guardian angels to make fate happen. There’s just one problem. These angels have already met — and don’t exactly get along.

Behind-the-Scenes: It was my first semester at film school. I was taking introductory classes. Making new friends. High hopes and big dreams of being a filmmaker “some day.” Well, half way into the semester, Paul Nathan (a high school student who was dual-enrolled in the college-level film classes) approached me and asked if I wanted to do a “just for fun” film project outside of class.

“Sure!” I said. We didn’t have a team yet. Or even a script idea. But that didn’t matter. The desire was there, and we were going to do something. I approached a few other people from my different classes. Individuals I saw great potential in. I invited them to be a part of the project. Paul Nathan and Domenick Kaiser were both aspiring writers — so they became our screenwriting team. Ren Tyler had great organizational skills and wanted experience being an assistant director. And I wanted to give directing a try. I knew Liz McDaniel from volunteering in a local church’s media department. She was a little further ahead in film school. In fact, she had referred me to this program. I asked if she wanted to be a part of this film — and she did, signing on as both producer and editor.

That was our starting team. We got together, brainstormed some story ideas, wrote the script, held auditions, met many talented local actors — offered the parts to the four people you see named above — and we were ready to make a film!

We wrote the script intentionally to keep it short and simple. It was filmed in one of our backyards. In Phoenix, Arizona. In the summer. Outside. Where temperatures got into the triple digits. We took lots of quick breaks inside in the air conditioning. We had extra water bottles, kept chilled in ice chests, constantly being passed out to the cast and crew — and frequently had to dry the sweat off the actors’ faces between takes.

But for a first-ever filmmaking experience (for most of the cast and crew), everyone was super professional and did an amazing job, all with a smile and great attitude. It helped that our producer provided an amazing and delicious selection of organic food and healthy snacks. Everyone was such a joy to work with. I know I was lucky to get to work with such a great cast and crew — especially considering it was my first time directing, and this whole film came about because a teenager asked if I wanted to do a side project with him for fun.

This film will always hold a special place in my heart.